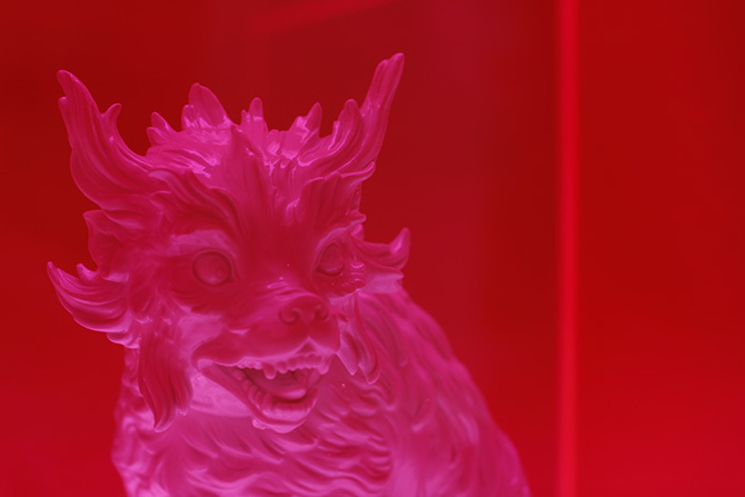 For the past seventeen years I have been writing down my art-related dreams, which I subsequently materialise in my installations. These short descriptions function as both instructions and titles of the works. Working in the continuation of other artists and writers whose work revolves around dream recollections, I use these protocols to create condensed and distorted, often absurd or ironic representations of art-making and exhibiting or being an artist. For the photography triennial RAY 2015 (‘Imagine Reality’), for instance, I developed a three-dimensional installation1 in which I overlayered Richard Meier’s Museum Angewandte Kunst in Frankfurt/Main with a dream scenario of a Meissen porcelain dog from the museum’s collection appearing on the backdrop of a 9 x 13 metre-large photo-wallpaper (a kaleidoscopic image of the dog). The evocative setting allowed only partial insights into the structure as a whole, thereby inducing shifts of perception that hinted at disintegrating, relativising or even hidden dream contents.

My project for the Résidence internationale at the CPIF centres on the visualisation of unconscious cultural phenomena through dream imagery (or images based on dream logic). For this, I intend to
move between different scientific and artistic realms and explore areas of the cognitive and neurosciences dealing specifically with dreams. Among other things, I want to find out which areas of the brain are active when we dream or relevant for the action in our dreams. This resonates with the idea that my work is essentially concerned with controlling dreams and editing memories. I hope to add new dimensions to my work thanks to this research, which potentially includes the development of new techniques and formats of image production – more specifically related to digital technology and film – as well as various printing processes that foster an extended conception of time and space."

Picture : Barbara Breitenfellner, Dream of an installation of a dog and various inclined surfaces. I was looking through a glass pane into a room. Brown-pink wallpaper + carpet. A strangely illuminated cube, which I saw as a photograph. Then we left the empty house.
Installation, RAY Fotografieprojekte Frankfurt/RheinMain, 2015
(photo: Anja Jahn)