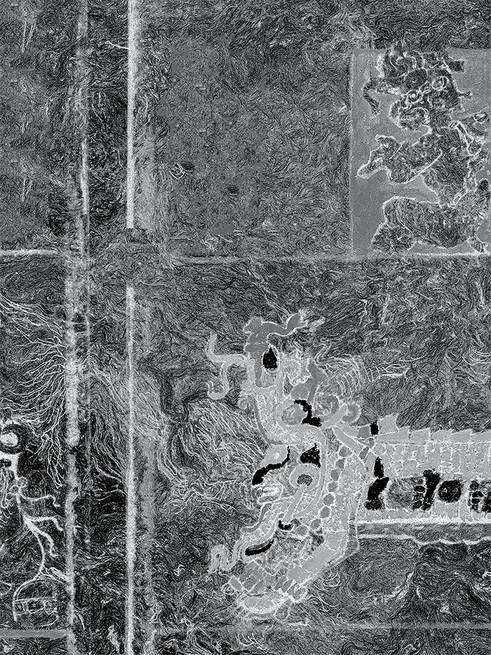 [Dates subject to change depending on the current situation]

The reserves of silver, a mineral that is a vital part of the analogue photography process, may well soon be exhausted. Working on this hypothesis and employing a hybrid practice associating photography, drawing, video and installation art, Daphné Le Sergent evokes and develops narratives in connection with the history of photography, the exploration of the Americas and data mining.

From the colonisation of Mexico at the start of the 16th century to the mining industry today, she explores the relativity of our cultural horizons (which are broadened by a “desire for rare things”) and tells the story of multiple encounters with otherness. Brought face to face with the inherent tension of this dialectic, visitors embark on a physical and mental journey in search of silver in the image, a journey that echoes both the rush to find this precious material and the construction of our perception of the world.

The polysemantic works that comprise the exhibit raise questions and contribute to the debate around the development of civilisations based on the overexploitation of natural resources. An extractivist cultural model emerges that is confirmed in the modern-day “gold rush” for data mined by algorithms.

Daphné Le Sergent presents a corpus that is the fruit of her many travels and which proposes unprecedented associations of places, periods and practices that appear totally unrelated, but which weave a web whose many connections visitors are invited to discover.

This exhibition brings together new and recent works and represents the culmination of research carried out between 2018 and 2021 during three residencies at the CARMA art and research centre in French Guiana. The first results of this work were exhibited at Atelier Hermès in Seoul (South Korea) in 2019.

Daphné Le Sergent was born in South Korea and works in France, where she carries out research into the notions of disjuncture and borders. Her work creates dissociation in the viewer’s direct perception by means of different arrangements (a polyptych with photos or videos) or by creating oppositions between different areas of an image (photo, drawing), which bear witness to the presence of a scission, a crack in the very intimate space of what the eye observes. After exhibiting her project “Géopolitique de l’oubli” in 2018 at the Jeu de Paume (Paris) and the CAPC (Bordeaux, France), as well as the Museo Amparo (Puebla City, Mexico), she presented “Silver memories: how to reach the origin” at the Atelier Hermès in Seoul (South Korea) in 2019. Daphné Le Sergent is a lecturer at Paris 8 University and a member of the AICA.

The project received the support of the Fondation Hermès and came to fruition thanks to the work accomplished during various artist-in-residence programmes, including three at the CARMA art and research centre in Mana (French Guiana) and one in SIAL (an RJC-certified, artisanal alluvial mining company in French Guiana) in partnership with CARMA and with the support of the French Ministry of Culture’s directorate of culture in French Guiana (as part of the “artist-in-residence in companies” programme). The photos on show were printed by Atelier Boba (Paris), further to technical research carried out specifically for this exhibition.

Daphné Le Sergent and the Centre Photographique d’Île-de-France would like to express their gratitude for the support given to this project by the partners that have already been mentioned, as well as Film Washi, Stéphane Cormier - Atelier de Tirages Argentiques, the Conservatoire du Littoral / Parc Naturel Régional de la Guyane and the Fonds A. Heuret.

We would also like to thank the following for their invaluable assistance : the Musée du Quai Branly - Jacques Chirac, the Collectivité Territoriale de Guyane and the Musée des Cultures Guyanaises.