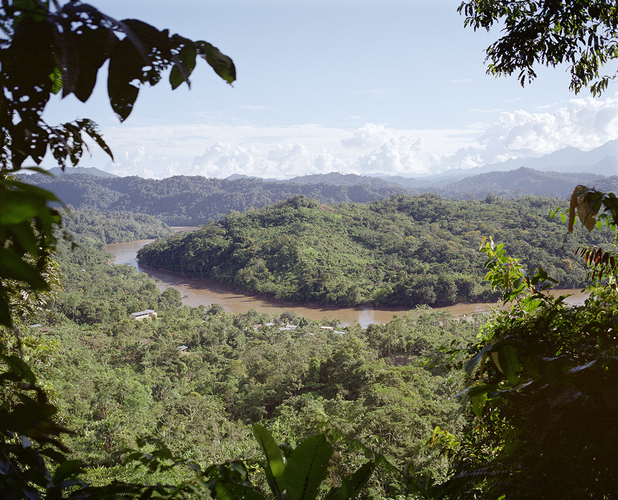 A project led by Eléonore Lubna and Louis Matton

For their first exhibition in a contemporary arts centre, Eléonore Lubna and Louis Matton are presenting the story of the struggles of the Awajún people in the Peruvian Amazon. To this end, the two artists put into place a creative process that aimed to build a collective memory.

In 1979, in the region of Alto Marañón (Peru), the indigenous Wawaim community fought to stop Werner Herzog from shooting his feature film Fitzcarraldo (1982) on its territory. For nine months, the members of the community and their representatives on the Awajún Huambisa Council led the struggle in the courts and the media. The conflict would result in the reassertion of the rights of indigenous populations by accelerating the emergence of new forms of collective organisation that were previously unknown in the Peruvian Amazon.

Forty or so years later, Ipáamamu - Histoires de Wawaim, a group project in the Wawaim community, documents the long struggle of the Awajún for self-determination.

Eléonore Lubna and Louis Matton first established a research group bringing together the inhabitants of Wawaim, Awajún leaders, researchers in the social sciences and European activists in 2016. Working together to recount the modern history of the Awajún from different viewpoints, they assembled a selection of Peruvian, North American and European images and texts produced since the 1950s.

Nina Gladitz’s 1981 film Land der Bitterkeit und des Stolzes (A country of bitterness and pride) made with the Awajún Huambisa Council will be shown in Europe for the first time since 1982. It tells the story of the conflict with Werner Herzog’s Wild Life Film Company.

Over the course of several trips to Peru, the two artists endeavoured to bring past events to life through the stories of the men and women who experienced them. Amongst other actions, they filmed a series of interviews for a film entitled Chichasmi and worked collectively to make pottery in the workshop of Amalia Wisum Chimpa. Their earthenware creations present the stories in a new form, while putting Awajún crafts at the heart of the narrative.

In a dialogue between the past and the present and with the intention of bearing witness to the latest events affecting the Awajún indigenous people, Lubna and Matton are also presenting two distinct bodies of photographic work.
The first, to which both artists contributed tells the story of everyday life in the Wawaim community.
The second brings together photos taken by Awajún leader Bernabe Impi Ismiño that are presented as a slide show illustrating the day-to-day organisation of the Awajún mobilisation against the Peruvian state. The movement (which they now call Baguazo) started in 2009 and represents their struggle against the extractivist policies advocated by the government of Alan García Pérez and the signature of a free-exchange treaty between Peru and the United States. In June 2009, Curva del Diablo and the town of Bagua became the theatre of bloody clashes between the police and native peoples.

The exhibition presents elements from different periods and by different authors with different intentions. Brought together by their historical and emotional connections, these elements give rise to tensions that create meaning and enrich the collective narrative.

In 2022, Ipáamamu - Histoires de Wawaim will continue in book form with photos, reproductions, articles, documents and archive material, as well as contributions from researchers and academics.

Eléonore Lubna (1989) lives and works in Paris. She graduated from the École Nationale Supérieure de la Photographie in 2016. In 2015, she shot Quai de la Gabelle, a collaborative photographic project with Roma families living in Arles (France) for which she joined forces with the PEROU (Pôle d’Exploration des Recherches Urbaines) group. An exhibition was organised in July 2015 during the Nuit de l’Année des Rencontres de la Photographie d’Arles in the buildings where the Roma families had taken up residence. Between 2017 and 2018, she worked on a project entitled Dzherelo de Kiev au Donbass with people who had fled war in the Donbass. This led to an exhibition at the Rencontres de la Photographie d’Arles in 2017, followed by others at the Fabrika Space in Kharkiv and at Izolyatsia in Kiev (Ukraine) in 2019. Since 2016, Eléonore Lubna has run workshops in various associations and institutions.

Louis Matton (1989) lives and works in Paris. After a degree in AES (economic and social administration) and a master’s degree in sociology at the Sorbonne, he enrolled at the École Nationale Supérieure de la Photographie graduating in June 2015. Between 2012 and 2015, he shot a photographic series entitled Objets Autonomes at the “ZAD de Notre-Dame-des-Landes”. This project was exhibited at the Rencontres de la Photographie d’Arles (2015), the Quinzaine Photographique Nantaise, F/stop Festival Leipzig and MAP Toulouse (2016), as well as at the Friche la Belle de Mai in Marseille (2017). In 2018, Objets Autonomes was published by Poursuite and l’Éditeur du Dimanche. Since 2014, Louis Matton has also been working on Aéroparis, a project featuring a fictional company that won a tender to build an airport in the centre of Paris. Aéroparis has been exhibited at Temple, Paris (2017), the BIP in Liège (2018) and at Paris City Hall (2019).

The project was made possible thanks to the support of the Centre National des Arts Plastiques and support received from the Fondation des Artistes after the project was selected by its patronage committee.