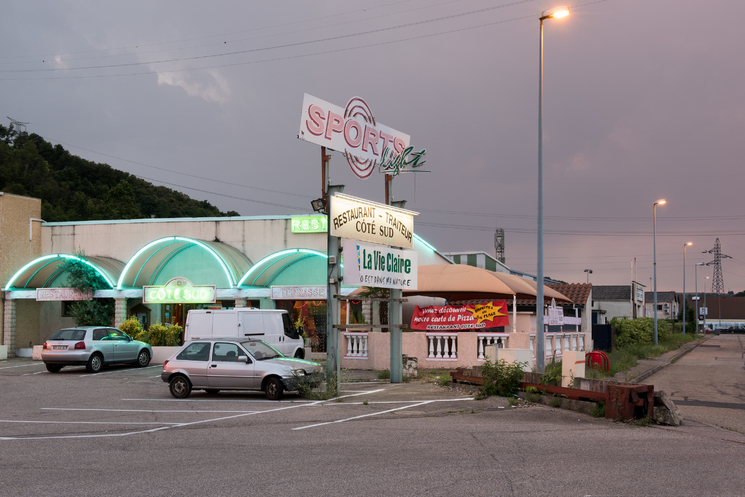 For ten years, Nicolas Giraud and Bertrand Stofleth crisscrossed a modest but exemplary corner of France, a succession of valleys joining the Loire and Rhône rivers that were one of the cradles of the industrial revolution. La Vallée is the result of this vast photographic project in which each image works like a cross-section of time, bringing together within the frame objects that are distant in time. La Vallée creates a dynamic between the constitutive elements of a landscape, which also bear witness to its history.

Juxtaposed with La Vallée, the exhibition presents two recent individual projects New Sites of Technology and Recoller la Montagne, which pursue the photographer’s joint reflections. These projects reveal how La Vallée resonates in the work of both artists.

La Vallée is the culmination of a long survey: layer by layer each image – and what lies in-between - establishes a visual architecture of modern times. The exhibition presents a selection of images that are, like the tip of the iceberg, a small part of a much larger corpus.

An augmented reality system allows each photo to work as an interface that allows visitors to access different series of images, as well as texts written by various authors and experts. Each image is accompanied by a caption that indicates the different timelines, the traces and echoes of history. By exploring these additional elements, visitors can apprehend the project’s many strata, the results of ten years spent surveying the land and collecting information. As much as the landscape itself, the subject of these photos is the passing of time and the constant struggle between wide-reaching changes and the acts of resistance of a region and its inhabitants.

La Vallée takes us from the time of the Roman Empire to the “start-up nation”, shining a light on the accumulation of History up to the incandescent present. The contemporary moment is the starting point for two other projects that are like a continuation of the first. Recoller la Montagne by Bertrand Stofleth explores the collapse of the landscape as we know it and the extent to which our environment has become unstable. New Sites of Technology by Nicolas Giraud observes the growing ascendancy of technology, which despite providing a constant flow of images escapes any form of representation.

Nicolas Giraud was born in 1978. His visual and theoretical work explores the mechanisms by which images are constructed and shared. Making use of the tools of photography and the visual arts, he points the finger at the omnipresence of representations in spaces that have become mere decors. Working in the photographic medium, using both his own images and those of others, Giraud addresses the fact that it has become impossible to represent an environment that has become fluid and changing (Indefinite Expansion, 2020 and Fire Season, 2013-2022). Since 2008, he has worked on several projects in connection with the American continent, notably Fall and Fire published in 2019 by Poursuite. Today, his research has led him to document the different forms of technological landscapes (Le Dialogue des Machines, CNAP and Fondation des Artistes). A more conceptual part of his work addressing the structure of our perceptions takes the form of installations (Orange, 2016), books (All Work and No Play, 2011) and research projects (Usage du Temps, published by ENSP Arles in 2019). He is also active as a critic and in teaching. His work can be seen regularly in France and abroad and it is present in the collections of the FRAC Provence-Alpes-Côte d’Azur and FRAC Champagne-Ardenne, as well as several private collections. He is represented by mfc-michèle didier in Paris and Dumont Gallery in Los Angeles.

Artist and photographer Bertrand Stofleth was born in 1978. He works in the mediums of photography and writing, carrying out his research both alone and as part of group experiences. His work addresses the way in which we inhabit our environment and questions both the usage and representations of landscapes. Above all, Stofleth documents in-between places: the banks of a river (Rhodanie, 2015), hiking trails (Paysages Usagés OPP-GR2013, 2012-22) and the outskirts of large cities (Transplantations et Déplacements). For several years, he has been taking an interest in the infrastructures of modernity, for example with his ongoing project Aéropolis, or La Vallée in collaboration with Nicolas Giraud. Since 2018, he has been focusing on the changes linked to climate and societal issues in the Alps (Recoller la Montagne), the Grand Est region of France (Hyperlendemains) and the Atlantic coast (Grand Littoral). These projects are either public commissions or part of residences (CNAP, BNF Radioscopie, Ateliers Medicis, DRAC RA etc). He has published several books including Rhodanie (Actes Sud) and Paysages Usagés OPP-GR2013 (Wild Project) and worked on various projects documenting the landscape with photographer Geoffroy Mathieu. He teaches photography in art schools and universities on a regular basis. His work is present in various public collections (FRAC PACA, FNAC, BNF, CPG Geneva), art museums in Sion (Switzerland) and Valence (France), as well as in French and international private collections.

Vernissage of the exhibition

In the presence of the artists

In the presence of the artists.